A product to be of high quality and unique beauty should have two important features:

That’s why our company uses only two types of mother of pearl for the manufacture of its products and inlays: white Australian mother of pearl (Pinctada Maxima) and the grey pearl of Tahiti (Pinctada Margaritifera). These are the two world’s largest shells (Bivalve) and they’re renowned for their beauty, variety of colors, durability and uniqueness. 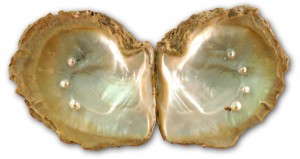 This shell is located in the Indian Ocean and the Pacific Ocean, primarily in Australia but also in the Philippines and Indonesia. It can grow up to have a maximum size of 30 cm in diameter. There are two varieties of Pinctada Maxima: the “silver lips” and “golden lips.” These are characterized by the different colors of the outer edge of the inner part of the shell that determines the color of the pearls that they produce. These shells are also known as “Mother-of-pearl” and produce the most beautiful and rare pearls in the world. They’re estimated for their great size and luxurious, superior to all the others, with a range from 9 mm and capable of reaching up to 22 mm for the largest. The white South Sea pearls are known for the luster, satin, and their deep glow, not common in Akoya pearls or freshwater pearls. The Australian pearls have a slight variety of colors, generally white, silver and gold, which are rare colors in other crops of pearls. The growth period of the Australian pearls is longer than that Akoya. Akoya pearls can be harvested already after 9-16 months, while the South Sea pearls are harvested after a minimum of two years to ensure that they are large enough. Pearls are rare and their value is tied directly to the quality of the surface, pretty much faultless as well as their amazing luster and size, a true gift of nature! 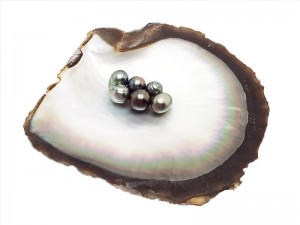 Pinctada Margaritifera is part of the giant shells of the warm seas: adults can reach 30 cm in diameter and weighs over 5 kg. Some examples of this oyster, sometimes called “black lipped pearl oyster,” can achieve considerable weight of 9 Kg. A distinctive feature of Pinctada is given by his change of sex in her life, even after the stress. Today we know that a female lays her eggs throughout the year, with two “peaks” at the change of the season. It takes two or three years before the oyster can reproduce. Only the extraordinary amount of eggs released by this bivalve (tens of millions), ensures the survival of the species in the wild, since the encounter with the sperm that fertilize the eggs is completely random. Pinctada Margaritifera produces pearls with a gradation of color from light gray to deep black (which is also called “Black Pearls”). They range in size from 8 mm to 20 mm.